Banyuaiki Dojo offers since 2005 aikido classes for adults, teens and children. The strong connection with Tada Sensei’s Gessoji Dojo in Tokyo denotes both the learning system and the direction towards which the practice is headed. 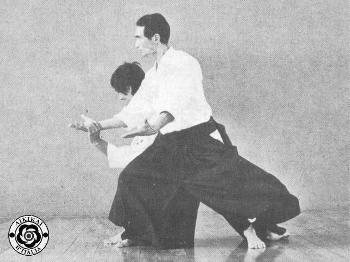 Tada Juku (多 田 塾) is the term used to refer to the teaching, the training system of  Tada Hiroshi Shihan, IX Dan, direct student of the Founder; Technical Director of the Association of Traditional Japanese Culture – Aikikai of Italy;  member of the Superior Council of the International Aikido Federation; Instructor at the Hombu Dojo inJapan, and Head Instructor of aikido classes at the University of Waseda University and the University of Tokyo (Kiren Kai) and other affiliates of the aikido Tada Juku.

Tada Sensei’s dojo is Gessoji Dojo, located in Tokyo. The chaotic sounds and colors of modern Tokyo lap the threshold of this temple, a truly timeless island.

We can summarize the direction of the practice in achieving a state of inner freedom, balance and knowledge. It is a profound, relentless spiritual endeavor which is the result of a free and personal quest. This condition, this inner state is called “Anjodaza” or moving Zen, or true meditation.

Tada Sensei’s teaching is essentially the result of the following main influences: O-Sensei, Tempu Nakamura Sensei, Yamaoka Tesshu or the Ichikukai, and his personal family tradition. These currents flow into the Tada Juku, a training system in continuous evolution, which has been evolving for the past 50 years as one can witness by participating in his seminars.

The training system at Banyuaiki Dojo is the same as the one at Gessoji Dojo, and can be divided into three parts: kokyuho, the actual techniques, and training for the perception of Ki. Kokyuho (kokyu=breathing ho=method) corresponds to a specific part of Raja Yoga, pranayama. It is essentially a way to balance the Ki with breath. Whereas in biological breathing oxygen enters the blood, in kokyuho one learns to draw from the cosmic all pervading energy (Ki) to “recharge” the nervous system augmenting its strength and sensitivity.

To increase the different capacities that are naturally present in us, we need a certain type of strength that is closely related to our ability and competence in the use of body, mind and spirit. This is why we work simultaneously on matter, energy and psyche. Kokyuho, or pranayama, is the link, a bridge, a tool to fix and keep in good conditions the vehicle “human being”.

We call this approach the “meditative mindset”, and it is always present during practice. Tada Sensei always reminds us that the techniques in aikido form an integral part of the same outreach towards union with the Absolute. Training elevates the practitioner from the world of duality, from the realm of the “relative” (attack/defense, win/lose), and from the mental conditions of opposition and antagonism without denying them.

Real Budo does not create the notion of enemy inside our mind. Aikido is an “absolute” martial art. Both the training system that direction are completely different from sports or other competitive activities. Of course, it is not a question of which is better. It depends on what the person is looking for.

To simplify, we can say that the principles on which we work on the tatami are to move out of the attack-line, to guide and control this attack by conquering the attacker’s center thus breaking his or her’s balance. All this to preserve our “center” in terms of physical balance and stability, but above all to maintain a neutral balanced state of mind which is disengaged from the so-called “negative” emotions that normally arise during a confrontation.

The characteristic movements of aikido naturally develop in the practitioner a state of tranquil awareness and in a fit and relaxed physical shape.

The third and final part of training is called ki-no-kanno-no-kunren, training for the perception of Ki, which is part of the practice of Kinorenma.

“Aiki” is a state, a condition from which one can freely create. From that condition, one can live the yushutsu, the spontaneous and natural flow waza (techniques) like water coming out of a spring. And from that point, one has the opportunity to live in the moment, feeling the creative iinstant, at every breath, anywhere.

The Association AIKIDO BANYUAIKI DOJO ROMA is affiliated with the the Italian Aikikai,  AIKIKAI D’ITALIA.

This website uses cookies to improve your experience while you navigate through the website. Out of these cookies, the cookies that are categorized as necessary are stored on your browser as they are essential for the working of basic functionalities of the website. We also use third-party cookies that help us analyze and understand how you use this website. These cookies will be stored in your browser only with your consent. You also have the option to opt-out of these cookies. But opting out of some of these cookies may have an effect on your browsing experience.
Necessary Always Enabled
Necessary cookies are absolutely essential for the website to function properly. This category only includes cookies that ensures basic functionalities and security features of the website. These cookies do not store any personal information.
Non-necessary
Any cookies that may not be particularly necessary for the website to function and is used specifically to collect user personal data via analytics, ads, other embedded contents are termed as non-necessary cookies. It is mandatory to procure user consent prior to running these cookies on your website.
SAVE & ACCEPT